Invite to the way of your Lord i.e. Islam with wisdom, and beautiful preaching, and argue with them in a way that is better. Chapter 16, Verse 125.

And argue not with the People of the Scripture unless it be in (a way) that is better. Chapter 29, Verse 46. 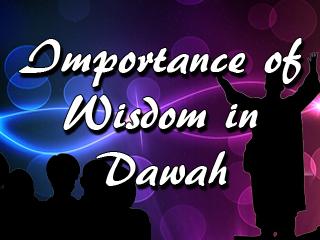 Dawah to Allah with Sure Knowledge and Certainty to be achieved through:

Importance of the topic and the reasons for its selection

By these ways, he enters the heart of the people through the widest of the doors and their hearts are opened towards him, and they see him as full of concern for their goodness and wellbeing. These can be accomplished through calling towards Allah with Hikmah, which is the only way for success in Dawah.

It is imperative that all the sayings, actions, thoughts, and planning should be full of wisdom and in accordance with correctness. Hikmah makes the Daee do things at their appropriate times and leads him in making efforts to know what benefits him and befits him. It makes him take an easier route to reach the goal.

MEANING OF THE WORD HIKMAH AND ITS IMPLICATIONS

MEANING OF THE WORD HIKMAH

Hikmah has a few linguistic meanings. Among those are:

The most prominent element we see in the meanings of ‘Hikmah’ and its implications is ‘prevention/prohibition’.  Hence the word hikmah is used in several meanings which consist in them the element of ‘prevention’

Therefore, the word justice prevents oppression, tolerance prevents anger, and knowledge prevents ignorance. It is the same case with the word Prophethood, because the Prophets prevent the people from worshipping others besides Allah and prevent them from falling into sins. The Quran, the Injeel and all other religious scriptures are meant to prevent people from falling into shirk and sins.

DEFINITION OF HIKMAH AS PER THE SHARIA TERMINOLOGY

The scholars have mentioned the meaning of hikmah mentioned in the Quran and hadeeth — the word himkah has appeared in the Quran in 19 places — and the scholars have different sayings about it.  Some said, Hikmah means Prophethood, some said it means Quran and its understanding with regard to its abrogation, it’s clear and allegorical verses, former and latter, halal and haram and so forth. Some said, it means correctness of speech and action. Some said, seeking the truth and following it.  Some said, it is the beneficial knowledge and good deeds (ilm un-naafi and amalussaalih), yet some said, it is the fear of Allah while others said it means Sunnah and some are of the opinion that it is knowledge and acting upon it. A person is not named as ‘hakeem’ unless he combines both the knowledge and actions.  It is also said that hikmah means to place the things in their proper place. Some said it is giving the right answer swiftly.

There are 29 sayings about the definition of hikmah, but all of those are close to each other in their meanings of hikmah because the word hikmah is derived from ‘ihkaam’ which means perfection i.e. perfection in speech and action. Therefore, the Book of Allah is hikmah, the Sunnah of the Messenger of Allah is hikmah and whatever elaborated on the Quran and Sunnah is hikmah.  The essence of hikmah is that it prevents from stupidity and imprudence.  Sometimes knowledge is referred to as hikmah because it prevents from silliness and thoughtlessness.

If we ponder over the word hikmah, we find that it encompasses all the meanings and implications given by the scholars in its definition i.e. the correctness in speech and action and placing everything in its appropriate place.

Examples of the word hikmah occurring as a single word are found in verses like Invite to the way of your Lord i.e. Islam with wisdom, and beautiful preaching, and argue with them in a way that is better.” (Chapter 16, Verse 125) and and he unto whom wisdom is given, truly he has received good in abundance (Chapter 2, Verse 269) and And verily We gave Luqman wisdom, saying: Give thanks unto Allah; and whosoever giveth thanks, he giveth thanks for (the good of) his soul. And whosoever refuseth Lo! Allah is Absolute, Owner of Praise” (Chapter 31, Verse 12).  This kind of hikmah we found in abundance in the Quran which fits all the definitions of hikmah given by the scholars mentioned above.

The hikmah that comes in conjunction with al-Kitab i.e. The Book, it means ‘Sunnah,’ consisting of Messenger of Allah’s sayings, actions, approvals, and his seerah as we see in the following verses:

Chapter 2, Verse 129 Our Lord! And raise up in their midst a messenger from among them who shall recite unto them Thy revelations, and shall instruct them in the Book and in wisdom (hikmah) and shall make them grow.  Lo! Thou, only Thou, art the Mighty,Wise.

Chapter 2, Verse 321 and remember Allah”s grace upon you and that which He hath revealed unto you of the Book and of wisdom (hikmah), whereby He doth exhort you.  Observe your duty to Allah and know that Allah is Aware of all things.

Chapter 3, Verse 164 Allah verily hath shown grace to the believers by sending unto them a messenger of their own who reciteth unto them His revelations, and causeth them to grow, and teacheth them the Book and wisdom (hikmah); although before (he came to them ) they were in flagrant error.

Chapter 62, Verse 2 He it is Who hath sent among the unlettered ones a messenger of their own, to recite unto them His revelations and to make them grow, and to teach them the Book and Wisdom, though heretofore they were indeed in error manifest.

Among the scholars who interpreted the meaning of hikmah that comes along with The Book as Sunnah are Imam Shafi and Imam Ibn-Qayyim.

THE RELATION BETWEEN THE LITERAL AND TERMINOLOGICAL DEFINITIONS

If we contemplate, we see that there is a deep connection between the literal and shariah terminologic meaning. They both include the beneficial knowledge, good and perfect deeds which are the essence of the principles of hikmah. So, the comprehensive definition is The correctness of sayings, deeds, and aqeedah with placing the things in their appropriate places perfectly and efficiently. Allah knows best.

By this definition, it becomes crystal-clear that hikmah in dawah is not restricted to soft speech, persuasion, tolerance, leniency, overlooking, etc. rather it is perfection and efficiency of affairs by handling the things appropriately in their relevant perspectives like debating when it is appropriate to debate in a best way, to be strict and harsh when required. This is what hikmah is in reality!

Whoever wants the practical evidence in this matter let him see it in the way of the Messenger of Allah and his behavior towards different kinds of people.  He is the one whom Allah has bestowed him with wisdom to the degree which He has not given to anybody else!!

© Invite To God. All Rights Reserved

As-salaamu ‘alaykum and welcome. We will love to hear from you and will be honored to clarify your questions. Submit your Questions bellow and our team will try to answer the questions as soon as possible with the best knowledge we have.